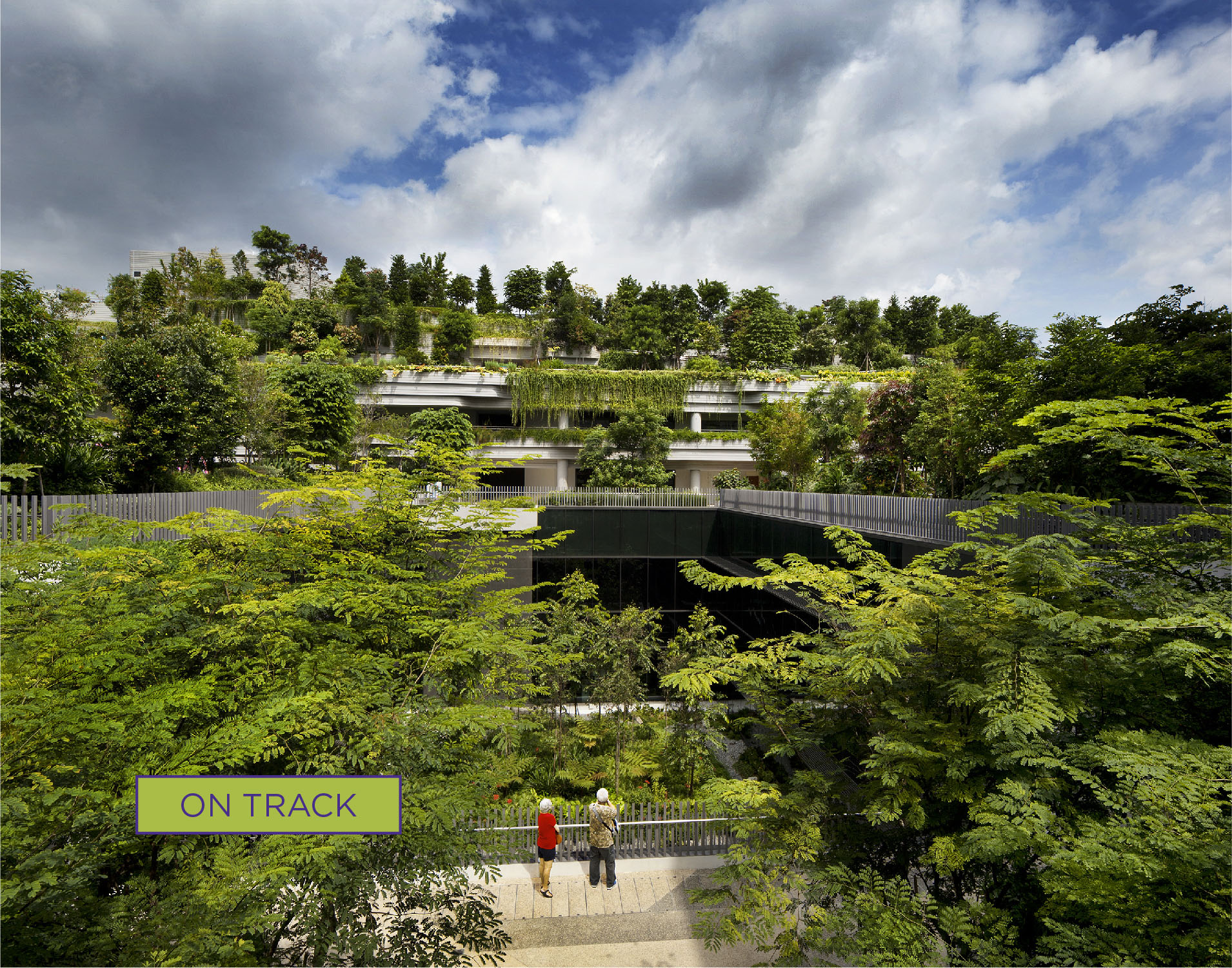 An island in the city

Singapore, a rich island state in south-east Asia, is a microcosm of bold architecture surrounded by an extensive system of parks and gardens covering almost half its surface area. Singapore is global in every respect; it is, in fact, the second most densely inhabited country in the world (behind only the Principality of Monaco) with the third longest life expectancy (behind Japan and Switzerland). Meeting the needs of an ageing and fragile population, in danger of being isolated and lonely while, at the same time, demanding much more in terms of standards of well-being, is a priority for healthier and more sustainable urban development.

Kampung Admiralty, which opened in 2017, is a project designed by Woha, a firm set up in Singapore in 1994 by Wong Mun Summ and Richard Hassell, pioneers of an approach aimed at combining nature and artifice to create eco-friendly environments. As the name suggests, the Admiralty complex is, in actual fact, a village that brings together in a one-stop complex the kind of communal spaces and amenities usually found in separate buildings. On one hand, it is an independent island incorporating a real mix of public and private functions providing what is known as silver housing specially designed for seniors that is served by business, socio-welfare and health care facilities; on the other hand, it is one of the city’s nerve centres, a road junction and pedestrian crossroads directly linked to an underground train station that helps promote intergenerational bonding to support policies focused around active ageing.

The complex covers the entire site on which it is built (approximately 9000 m²), fully exploiting the area available and divided over three main levels, respecting – thanks to its rather wild landscaping – a building height limit of 45 metres. The lower level accommodates a large covered public plaza incorporating shops, bars and restaurants that are used for holding parties and other events. People can also congregate and socialise here comfortably seated on wide benches set around the bottom of the columns. The paving of the Community Plaza is made of coloured triangular elements in shades of white, grey and scarlet, which also extend outwards by the entrance to showcase the very public nature of this building. The plaza is a bright and well-ventilated place with plenty of natural lighting that is sheltered beneath curtain roof to allow business to proceed normally regardless of the climate and weather conditions. The hawker centre (a typical feature of Singapore’s culture, a sort of food market), which is set on the second floor, accommodates various kiosks serving local dishes with seating for a 1000. A garage set over two underground levels also accommodates a supermarket.

The second macrolevel of this multipurpose infrastructure holds a medical centre. The Admiralty Medical Centre means local residents do not have to go to hospital to see a specialist, receive outpatient care, follow rehabilitation programs or undergo minor surgical procedures. It features extremely well lit, open and welcoming spaces made of warm materials in soft hues and tones. The aim here is to maintain constant (mainly visual) links with the vegetation in the inner courtyard. This is aimed at helping patients recover and enhancing an overall sense of physical-mental wellbeing while meeting elderly patients’ need to feel supported, stimulated and in touch with nature.

Above this two-storey platform, the main block loses its compactness as it hollows out in the middle to allow air and light to flood into the lower premises; at one end two residential blocks with a cross-shaped base tower upwards, at the other end there are a series of spacious terraces landscaped with luscious vegetation. Community Park’s greenery takes up half of the outside area of the building to serve various purposes: it gives shape to striking views of a very tropical nature as it draws in the impressive surrounding landscape; there are rainwater collection, filtering and recycling systems and plenty of shade beneath the porous foliage of the trees to reduce surface temperatures and promote an efficient and sustainable growth model; there are plenty of water sources and a wide variety of vegetation (plants, bushes, flowers and fruit trees) to help protect urban biodiversity, creating an alternative habitat attracting different species of birds and insects; lastly, this large park forms a network of communal spaces in which residents – permanently surrounded by nature – can enjoy physical exercise, congregate, socialise, host friends and family, play with their grandchildren and garden on the Community Farm.

The two residential towers, each eleven stories tall, accommodate about a hundred protected apartments for seniors, specially designed for either single people or couples. To meet the occupants’ needs, each apartment has been built along the lines of universal design: this makes them easily accessible, safe, comfortable, flexible and easy and intuitive to use. The numerous windows overlook hanging gardens to let light spread uniformly and to help naturally cool the apartments. To encourage seniors to leave their homes and interact with other residents, various buddy benches have been installed to allow people to mix easily. To encourage socialising and interaction between different generations, Kampung Admiralty has two other amenities: a Childcare Centre, where grandparents can look after their grandchildren while their parents are at work, and an Active Ageing Hub where daytime activities are organised to promote active ageing, facilitate social integration, raise awareness about self-sufficiency and teach seniors new skills to enable them to contribute to the community through voluntary work that keeps them socially active.

The Kampung Admiralty project has been awarded numerous international prizes and commendations: in 2018 it was chose as the World Building of the Year at the WAF – World Architecture Festival. The neuroscientist, Michael A. Arbib, an emeritus professor at the University of Southern California, praised the Admiralty complex in his latest book entitled When Brains Meet Buildings: A Conversation between Neuroscience and Architecture (Oxford University Press, 2021). Based on principles of biophilic design and developing spatial conditions that create a greater sense of community, this building functions like an authentic “system of systems”, in which social, infrastructural and natural systems intertwine to create – by weaving together – a whole that is bigger than the sum of its parts, offering obvious inevitable benefits on both a relational and environmental level.