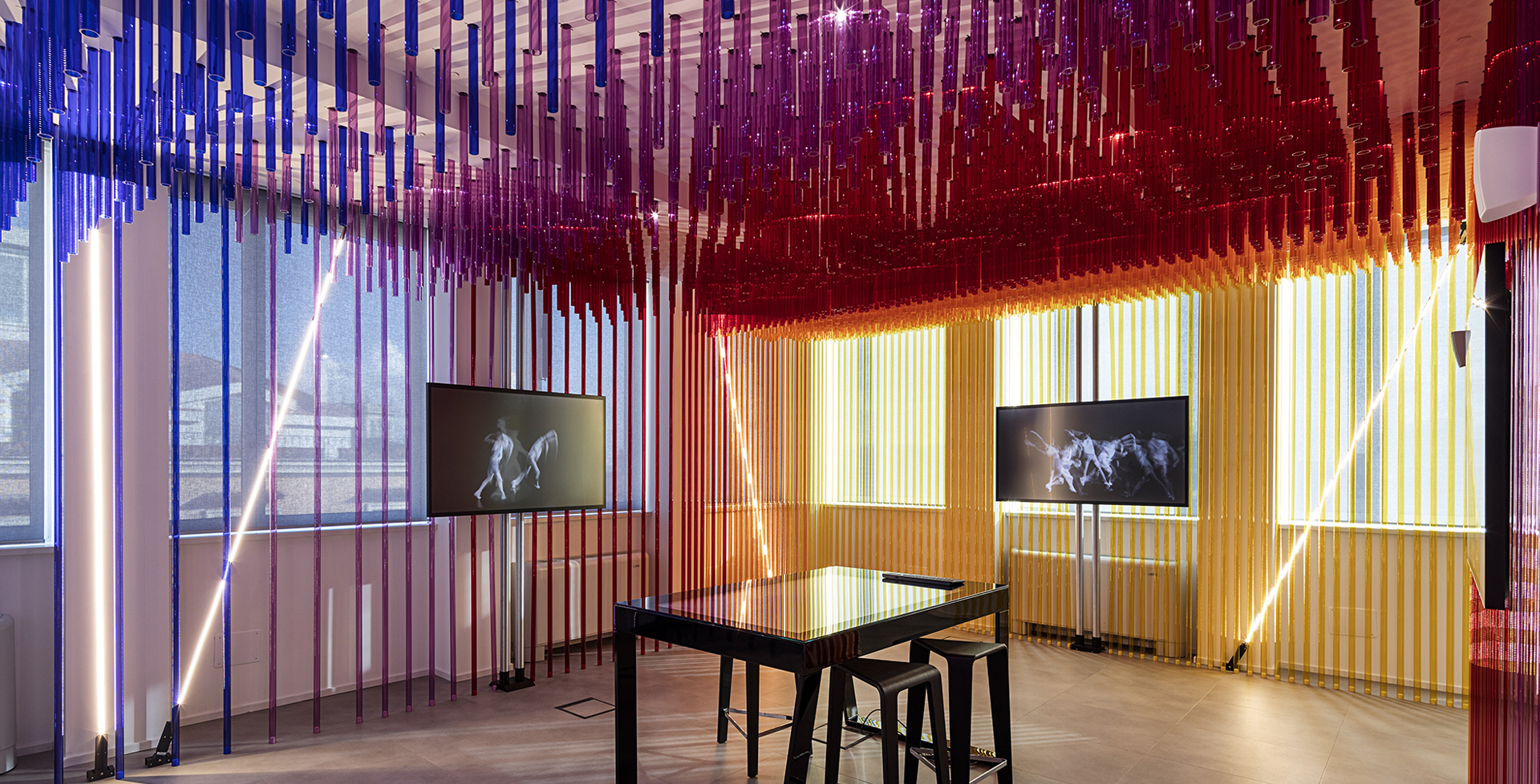 A lab, a space for discussion, learning and cooperation. This is EY Wavespace. The transformation of an innovative functional program into an architectural project was based on studies about the relationship between the perception of space, action, and emotional dimension that have been defined by neuroscience throughout the last decades.

Every human activity triggers different expected background feelings, which require to be satisfied during the experience. Architecture can ‘mirror’ these bodily feelings through the organization of its plastic (topology, geometry, boundaries proxemics), material, rhythmic, luminous, chromatic and acoustic components.

The choice of different orchestrations of these tools, aims to anticipate the expected feeling during the perceptual experience. Coherence and harmony between expectation and bodily perception, can produce a physiological balance and a feeling of well-being: in this way the activity performed is strengthened, since the pre-reflective and the cognitive dimensions are in balance and follow the same direction.

The functional program defined seven rooms, dedicated to different activities, and that can be synthetized in seven words: discover, move / act, think, connect, feel, learn, and be. This required to find in the first place, coherent sensory-motor physiologies: discover was associated to activation, move / act to energy, think to wonder, connect to freshness, feel to warmth, learn to lightness, be to relax.

Bodily movements, in their phases of cinematic development, are characterized by not only postural configurations, but also by various physiological combinations, according to the different background feelings they express: dance expresses activation, as the muscular tension contains energy. The birth is the fundamental experience of wonder. The physiological experience of dive contains freshness, the hug is the incarnations of warmth, the jump expresses lightness, and lying down is associated with relax.

Throughout history of art, from the cave in Altamira to contemporary art, bodily gestures are used to express these feelings, as understood by Aby Warburg, who coined the term of Pathosformel, or forms of feelings, to express the formal elements which appear unvaried along the history of visual arts.

All bodily movements are composed by different gestures, which develop in time. During its cinematic development, the body undergoes some transformations. The dynamic characteristic of the gestures is similar to the movement of the human body inside architecture: moving in space, its perception is never static. This analogy was the key element of the project. These transformations indeed, can be unfolded along the main trajectory of use chosen for each space, which lead to the final configuration of spaces in order to trigger in the perception certain background feelings.

For each one of the seven rooms, we defined architectural layers that could translate in the most effective way the various cinematics of bodily gestures in a dynamic form.

The physiological analysis of Dance highlights some peculiar traits: serial repetition of the gesture, a constant relocation of the inner ear, tension-relaxation alternation of the muscular system.

The key compositional elements in this room are the visual rhythm, the configuration of the false ceiling, colors and materials.

The gradual development of the gesture is translated into a visual rhythm that progressively becomes more compact and tighter. The space is divided in length into seven environments that gradually tighten: the beams from the outside are overturned on the internal wall, and other beams are added to improve the rhythmic progression. This sequence is highlighted by the changing configuration of the false ceiling that lowers and raises progressively. Materials and colors, with warmer and colder tones, alternate along the development of perception.

The physiology of this gesture has a reduced dynamic dimension. The main elements in this case are the tension of the muscular system, the syncopated discontinuity of rhythm, the salience of haptic involvement.

The architectural features which more effectively translate these elements are the geometries of vertical and horizontal boundaries, characterized by straight geometric figures, squares and rectangles, with a rhythmic discontinuity in the lowering of the false ceiling. The panels and false ceiling are realized with materials characterized by rough textures, with alternation of colors from dark to light tones of ochre.

The dynamic physiology of Birth is characterized by four phases: equilibrium, disequilibrium, trauma, release. The first three phases are mainly tactile, while the last one focuses on vision.

The architectural elements involved in this case are the false ceiling, the materials and the light. Considering the dimensions of the space, the first three phases are translated into the spatial configuration of the entrance’s threshold, while the fourth is translated into a lit heart on three walls of the room. The threshold of the entrance is characterized by an increasing thickness of the material, while the ceiling lowers so that the passage is almost impossible. The room is lit on three sides, and its walls and ceiling are mirrors, in order to produce the optical illusion of infinity.

The dynamics of Dive produce four distinct physiological conditions: equilibrium, a preparation to dive, jump, and contact with water. The musculoskeletal system, the inner ear, the auditory system, the skin and the vision are the main elements which are involved in the transformation.

The architectural realization consists into an entrance space, divided into two environments, to translate the preparation phase and the jump, while the bigger and brighter space of the room lit on three sides, is used to express the feeling of immersion. In the first environments the ceiling lowers and then raises, and the brightness varies from lower to progressively more intense. In the largest space of the room, a blue color and an intense light are used, together with cold materials, to express the feeling of entering in water. In this space, video-acoustic technologies were implemented to simulate the contact with water.

The physiology of Hug is characterized by three different conditions: the first of separation between the bodies, a second phase of overlapping of the peripersonal spaces, and a third condition of contact between the two bodies. The musculoskeletal system, skin and vision are the components interested.

This transformation is translated into architecture through geometry, proxemics of boundaries, material and color. In the three main environments, which replicate the dynamics of the gesture, the ceilings and walls move closer to the body of the user. From the second to the third environment the geometry becomes progressively more curvilinear, while the materials of the walls are soft and colorful. The light becomes gradually dimmer.

The physiology of Jump is composed by three different phases: equilibrium, load of tension and release towards the top. The proprioceptive and musculoskeletal system, the inner ear and the vision are strongly involved in this physiological modification.

The location of the ceiling, the visual rhythm, the materials and the light are the elements which play a role in the translation of this gestures into the perceptive dimension. The sequence of the three environments, which represent the three phases of the movement, is expressed in the second space by a lowering of the ceiling, in order to accentuate the drastic raise in the third one. The visual rhythm is more compact in the second space, while is extended in the third: some graphics on the vertical walls are implemented to visually transfer this movement. Along the lowering of the central space, the light changes from a neutral condition, to an increasing intensity in the final space. The sequence puts in contact a warm material in the second environment with a cold one in the third.

The movement of a body that lies down on the floor can be deconstructed into four different images: equilibrium, an initial lowering of the body, semi-extended, and finally the complete relaxation on a horizontal plane. The inner ear and the musculoskeletal system, vision and touch are the sensors mostly involved in this physiological transformation.

The compositional elements useful to satisfy the proprioceptive dynamics are the horizontal and vertical boundaries: from the first to the fourth environment the false ceiling constantly lowers, and the inclination of the wall increases, so that the boundaries of the peripersonal space get closer. The materials, along the perceptual trajectory, change from cold to warm and from hard to soft. The intensity of the light gradually and constantly decreases.