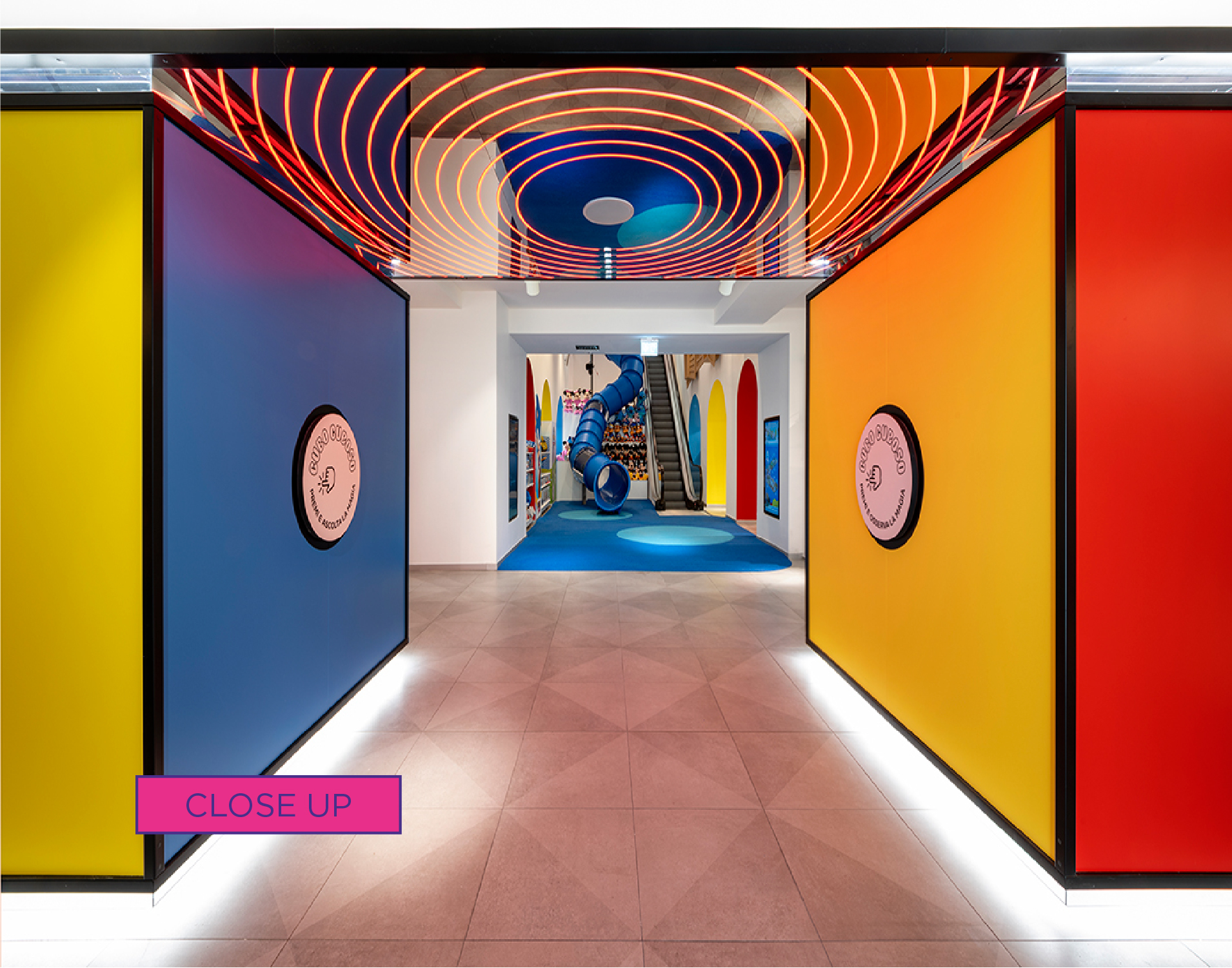 The new flagship of the Giochi Preziosi Group has been inaugurated in Milan. The store project, conceived by the two Lombardini22 brands L22 and FUD, aims to combine sales and emotional experiences through a series of playful atmospheres in which children can discover and interact with the space and with others, and the products can be described and sensory experience.

Neuroscience and environmental psychology provide their contribution to the understanding, through interdisciplinary and systemic interpretations, of the intense relationship that is established between human beings and the space that surrounds them during playful activities.

In fact, space has a strong influence on physical and mental health, especially in the first ten years of life. An environment in which children can interact and move through play has various positive effects in the construction of identity and socialization. Let’s see what it is.

Young visitors are welcomed at the entrance by the large Cubo Cuboso, an interactive threshold that marks the perceptive passage from the real world to the fantastic one. The sensory experience is enriched with unprecedented and engaging emotions through light, sound, and visual stimulations, which solicit attention and entice visitors to interact with the surrounding environment.

The Alpha generation, the name with which the Australian psychologist Mark McCrindle identified children born between the tens and twenties of the new millennium, unlike previous generations, in fact, seems to hate chats, social networks and smartphones, preferring active, participatory and above all physical involvement.

The motto From kids, for kids, which accompanied the design process, focuses, not surprisingly, on three key words: amaze, involve and empathize, emphasizing the strong relationship between children, the place where they immerse themselves, and the medium through which they live experiences: the body and the senses.

A slide connects the upper floor, where we meet the Princely Theater with an interactive platform and luminous clouds, the Rumbling track, the Bazaar of fun, to the lower one, where there is the House of Hugs, a padded space with soft toys, the Candy corner and the Grove of words, a scenographic environment dedicated to reading.

A contemporary play sanctuary, therefore, where children can indulge in pro-social (Cappello 2017, p. 48) and stimulating activities.

The game, even if often weakened and disqualified in adulthood, has played, and plays an important role in the life of each of us, from many points of view. Indeed, as Valerio Perna argues in Ludic activity as a design strategy:

Research conducted in recent years in the fields of neuroscience, physiology and environmental psychology have highlighted how much playing, and especially playing together with others, has multiple effects on children. In fact, it has been demonstrated that these activities allow the child not only to develop creativity and imagination, express their identity, increase their behavioral flexibility and acquire social and cognitive skills (Trezza et al. 2010), but also to increase versatility of movements to recover from sudden shocks such as loss of balance, improve the ability to cope emotionally with unexpected stressful situations (Spinka 2001) and finally enrich one’s communication skills and refine one’s visuo-spatial skills.

The game is also favorable to the neuroplasticity of the brain ─ in particular until the end of adolescence ─ as the harmonious movement of the body, which the game promotes, burns up to 60% of the total energy produced by the metabolism, then going down to 25% in the adult stage. In this context, the game is an efficient way to use energy, refining kinematics, gestures and simulation capabilities.

A team of Italian and Dutch neuroscientists led by Viviana Trezza, behavioral neuropharmacologist of the Department of Sciences of the RomaTRE University, recently discovered that the brain areas most involved during playful activities would be the nuclei accumbens[1]. These clumps of neural cells located in each cerebral hemisphere, in fact, would be activated during the game by producing the so-called dopamine receptors or dopaminergic receptors. These are endogenous neurotransmitters that are released by the brain in situations perceived as pleasant and that are activated during cognitive processes such as memory, learning, motivation, and other neurobiological processes.

As stated by Jaak Panksepp ─ psychologist, psychobiologist and neuroscience researcher ─ the production of dopamine is also linked to one of the 7 primary emotional systems, the “search” system, but also to many other emotional systems that allow us to survive and that we share with all mammals. Last but not least for the formation of identity in the inter-subjective relationship it is precisely the simulation, the as if, typical of the game, the driving force that strengthens empathy towards others.

This discovery is of fundamental importance because the affected areas are also the main responsible for the behaviors related to the survival instincts of the individual and of the species. The game would consequently be inserted among those primordial needs elaborated by the nucleus on a par with nutrition and reproduction..

A 2018 study reveals how much the deprivation of play in the developmental phase leads to some cognitive deficits in adulthood such as mental rigidity and alteration of control and decision-making impulses.

Stimulating the natural propensity to play consequently improves a child’s adaptability to a stressful condition and promotes cognitive, social, emotional and psychomotor functioning, thus strengthening the foundation for their future health (Nijhof 2018).

The way children and adolescents play changes as they grow up, but the categories of play are not mutually exclusive: they overlap depending on development, interests and moods. Children may actually switch between different types of play and levels of complexity or be engaged in different play categories at the same time (Nijhof 2018).

In order for the social dynamics and neuro-psychobiological mechanisms linked to play activities to be triggered, it is essential that the game takes place in a stimulating and multisensory environment that facilitates socialization and takes into account the value of the body and development of the child over time.

Thanks to advanced technology, specific materials, welcoming and engaging spaces, the new Milan game store designed by Lombardini22 aims to bring everything into play.

[1] The Nucleus Accumbens also plays an important role in the cognitive processes of aversion, motivation and reward.