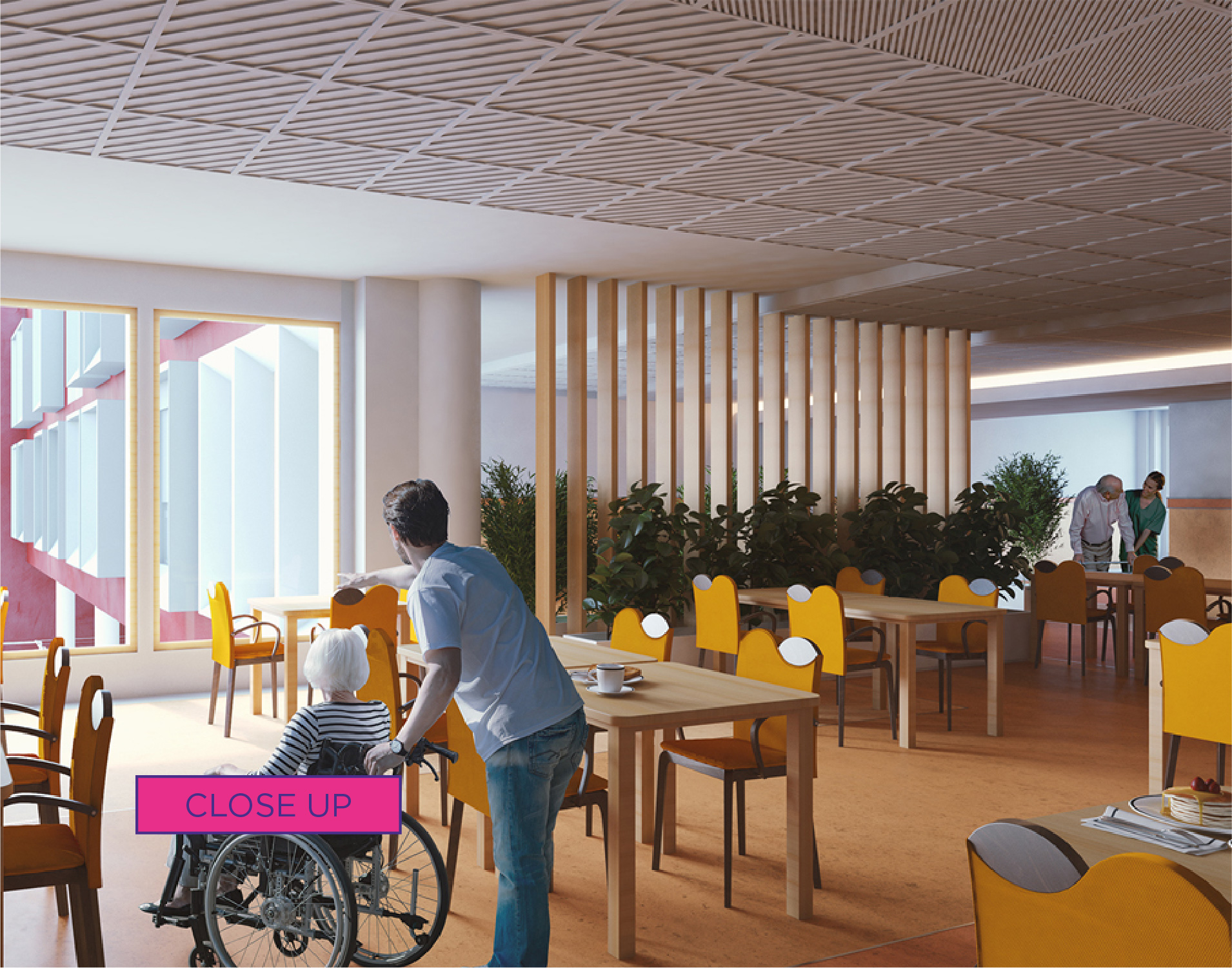 A new healthcare residence concept for elderly in Padova

While aging is a natural process that commonly leads to physical and cognitive decline, there can be more important impairments leading to complete loss of autonomy and social complication for the elderly suffering from dementia.

Natural cognitive decline usually involves episodic and working memory, conceptual reasoning, processing speed, and attention abilities (Harada, Love, Triebel, 2013), which are primarily linked to the hippocampus, area of the brain in charge of memory, and learning. However pathological impairment, such as Alzheimer’s and other dementia diseases, has become one of the greatest threats while aging nowadays. Nearly 50% of adults over the age of 85 are afflicted with Alzheimer’s disease (Bishop, Lu and Yankner, 2010). Dementia not only accelerates and exacerbates normal aging decline, it also leads to more important impairments such as complete loss of memory and thinking ability, and decline in behavioural abilities. The environment in which the elderly live has a tremendous impact on their abilities’ decline. By designing in accordance to the medical knowledge, we can not only create spaces that are supporting to the impairments but also mitigate the speed of the decline (Nordin et al. 2017)

The call, launched by the municipality of Maserà (PD), for a Healthcare residence for elderly people who are not self-sufficient, provided KOS with the opportunity to develop, thanks to the research conducted in recent decades by cognitive neuroscientists and environmental psychologists, an architectural design focused on the psycho-physiological well-being of its users and able to challenge the degenerative diseases that many elderly people would suffer.

It is well known that space has a strong influence on people’s body-brain structure and how fully the emotional dimension acts on their rational and motivational processes.  Research has shown, in fact, that there are strong relationship between man and space that welcomes human activities and that these reside in emotions.

Thanks to the studies carried out by the neurobiologist Antonio Damasio, we can now say that emotions, contrary to what was previously believed, are fundamental for the development of rational thinking. In order to understand what a space should arouse, we can look at the so-called precognitive expectations. As it emerges from the research on the evolution of mind the expectation of an emotion already experienced has been linked over the millennia to every human activity. These expectations would therefore act as a connection between the activities and the sensory-motor metaphors that can trigger them. Anyone who experiences a place with a particular purpose expects to experience, in that space, a specific emotion. The design of the space can then establish these connections accordingly.   It is with this that architecture must be able to establish relationships.

A question should, then, be asked: how could the architectural design support humans in their activities? It is from these premises and from this question that KOS and Tuned’s scientific responsible, Davide Ruzzon, together with the entire lombardini22 team, moves.

The main goal is to create harmony between precognitive expectations and the emotions triggered by the perception of space and the embodied simulation that follows the recording of signals transmitted by the shape of that space. For this purpose, an innovative method has been developed. It is based on the identification of clusters: homogeneous spatial areas capable of producing a multisensory perception oriented to a predetermined emotion. Among the clusters chosen, the access path from outside, the residential units, the connecting corridor and the rooms. In order to be able to consistently regulate the spatial configuration of the architectural areas, the precognitive expectations of the users were then determined.

The first cluster, which connects the outer space of the residence with the multifunctional room on the ground floor, for example, has been designed to respond to the expectation of belonging to a community. The first perception to the building can strongly mark the way the sojourn will be addressed. It is a sort of imprinting whose emotional fragility – due to the awareness that you are going to a house from which, probably, you will no longer come out alive – requires a careful design of the various perceptual stages to make sure to open new windows of the future.

The motor-sensory metaphor that preserves the emotion of belonging is the embrace. This path, therefore, will send signals to the user’s mind-body system which will reproduce the neuronal map of the embrace.

Once selected, motor-sensory metaphors were analysed to identify how individual motion reception systems were activated in the phases that make it up. This knowledge is fundamental to understand how to design and make formal choices to characterize each individual cluster.

In the first case, the phases of the embrace coincide with the four nuclei of the cluster, so that the multisensory perception developed along the path allows to progressively integrate traces that are able to re-emerge, thanks to the embodied simulation, embrace’s memory of the and its emotional correlate.

Topology, proxemics, light, rhythm, materials, geometry of space, textures and colours of surfaces, sounds and smells are among the architectural elements that play a leading role in the development of this effect. Some of them are causally related to the mnemonic traces recorded in the neocortex by the body movement, others are able to produce Correlated Coherent Emotions with the feeling of expectation.