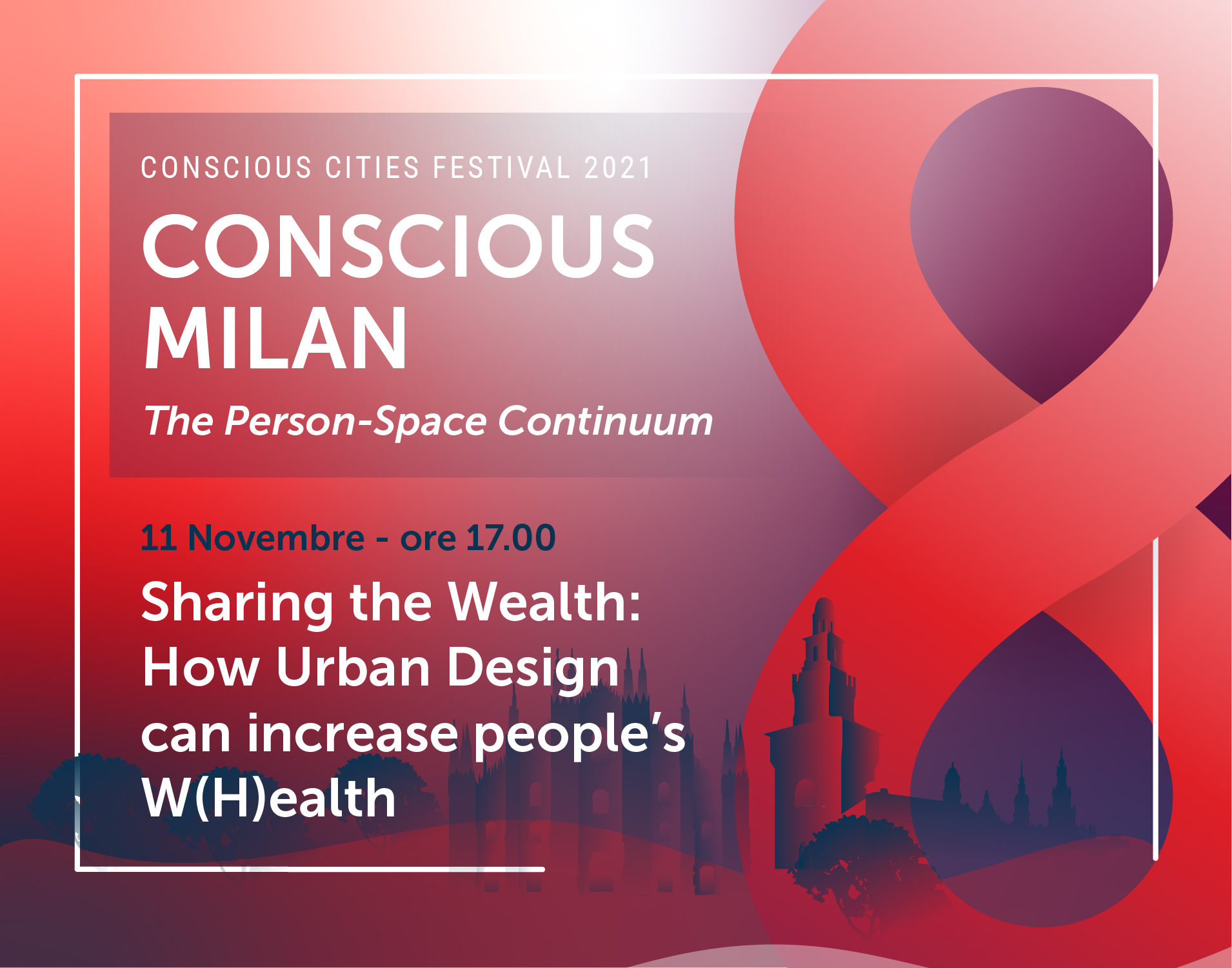 On November 11th 2021, in occasion of the Conscious Cities Festival: The Person-Space Continuum (CCF2021), Lombardini22 will host the conference “Sharing the Wealth: How Urban Design can increase people’s W(H)ealth”, promoted by Conscious Milan, and where globally recognized architects, neuroscientists and sociologists will participate.

The movement is represented worldwide by 36 cities (Chapters), that in the past years created a multidisciplinary community, and that will come together at the Festival with series of talks, workshops and other activities, to explore the future of science-based urbanism.

The theme of the 2021 edition is a celebration of diversities in cities, and of the importance of a ‘continuum’ between decision-making processes and citizens’ wellbeing.

The Milanese Chapter, Conscious Milan, will focus on ecology, health, architecture, urban planning and inclusiveness, as a reaction to the global climate crisis and the social challenges present in our cities. Cities have always been the proof with which the effectiveness of social issues management is measured.

Speciﬁcally, one of the aims of this event is to understand how the Green New Deal, with the different interpretations offered by Western countries, together with the multidisciplinary analysis that neuroscientists, architects, and urbanists have been doing for years, could demonstrate that the urban space can mitigate or increase mental fatigue and stress, produced by daily experiences that people live in urban environments. To understand the extent of dangers to people’s health, and to strengthen the environmental and architectural responses to contrast them, Sharing the Wealth will gather figures from different fields.

CCF2021 is co-sponsored by Lombardini22, Conscious Design Kalpa and Hume.

is an architect and the director of TUNED, a group that works both in research and design applying neuroscience to architecture, and it is part of the Milan-based office Lombardini22. He is also the scientific director of the Postgraduate Master’s program NAAD ‘Neuroscience Applied to Architectural Design’ at IUAV, Venice. He is also a member of the European Healthcare Conference’s Program Committee that is held each year in London. Together with Sarah Robinson and Alessandro Gattara, he is co-editor of the new architecture magazine ‘Intertwining’ published by Mimesis International. He and Vittorio Gallese jointly wrote “Tuned Architecture” (2016) and “L’architettura delle differenze” (2013). He also wrote and edited various collections of essays, run the editorial staff of Anfione Zeto, and organised seminars and conventions.

(RIBA, ARB, Assoc. AIA, Ph.D., PFHEA, FRSA) is a qualified architect and Dean of the Pratt School of Architecture in Brooklyn, New York. Prior to this, she led the Architecture Research Programs at the Royal College of Art in London. Her teaching, research, and writing focus upon pioneering new pedagogic models for design education, and for widening participation in architecture to ensure it remains as diverse as the society it seeks to serve. Dean Harriss has won various awards including a Brookes Teaching Fellowship, a Higher Education Academy Internationalisation Award, a Churchill Fellowship, two Santander Fellowships, two Diawa awards, and a NESTA (National Endowment for Science Technology and Art) Pioneer Award.

is full professor of architectural and urban composition and since October 2021 Rector of the Iuav University of Venice. He has received architecture awards for his projects and buildings, which have been exhibited in Italy and abroad. He has held lectures and seminars in various Italian universities and institutes, in Europe, Asia and South America. He is the author of essays and volumes on sustainability in architecture. He has curated exhibitions for the Milan Triennale such as “Exporting the historical center”, with Anna Magrin, “Africa Big Change Big Chance” and a section of “The architecture of the world”, with Alberto Ferlenga and Marco Biraghi, and their respective catalogs.

is the Robert S. Lynd Professor of Sociology and Co-Chairs the Committee on Global Thought, Columbia University. Her recent books are Territory, Authority, Rights: From Medieval to Global Assemblages (Princeton University Press 2008), A Sociology of Globalization (W.W.Norton 2007), and the 4th fully updated edition of Cities in a World Economy (Sage 2011). The Global City came out in a new fully updated edition in 2001. Her books are translated into twenty-one languages. She is currently working on When Territory Exits Existing Frameworks (Under contract with Harvard University Press). She contributes regularly to OpenDemocracy and The Huffington Post.

is cognitive neuroscientist at the University of Waterloo and director of its Urban Realities Laboratory, which works at the intersection of neuroscience and architectural and environmental design. He is the author of Places of the Heart: The Psychogeography of Everyday Life and You Are Here. He has conducted scientific work in neuroscience and environmental psychology for the past thirty years and has also contributed to the public discussion of environmental psychology through his work with museums and the media.

is an architect and planner with experience in policies and practices for sustainability and local development, strategic spatial and social planning, urban economy, and urban creativity. He teaches at the Department of Economics and Management of the University of Ferrara, Italy, and for more than two decades he has worked with municipalities, regional governments, and local communities. He has designed experimental postgraduate programmes involving European, Latin-American and Japanese universities, among which the MA MaPaus (School of Architecture of Ferrara) and the MA Ecopolis (School of Economics of Ferrara) which he directed from 2001 to 2013.

is doctor and neurologist, and Professor of Psychobiology at the University of Parma and Senior Researcher of the Department of History of Art and Archeology at Columbia University in New York. At the University of Parma, he is Coordinator of the PhD in Neuroscience, Director of the Doctoral School of Medicine and Director of the Laboratory of Neuroscience and Humanities. His research focuses on the role of the motor system and on ’embodied simulation’, a neuroscientific analysis of intersubjectivity. His main contribution is the discovery of mirror neurons, together with colleagues from Parma, as well as the development of a theoretical model of perception e social cognition, the Embodied Simulation Theory.